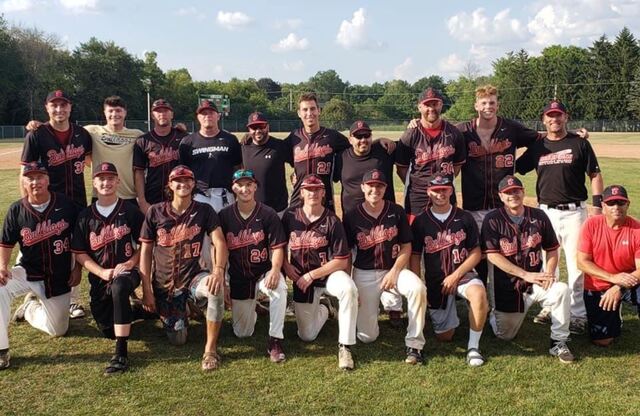 With the Bulldogs splitting with the Cardinals during the regular season (11-2 win and 5-3 loss), they knew they were in for a battle in the Championship Game Sunday in Monches. Mike Mierow, who was gassed after pitching and catching in the previous 2 games, took to the hill for the start. The Cardinals quickly put up 3 runs in the 1st inning and another run in the 2nd inning to make the score 4-0. Trey Bretl, who was 4-0 pitching for Brookfield during the regular season, came on in relief and calmed the storm and the Bulldogs offense erupted for 4 runs in the top of the 4th inning to tie the game 4-4. Parker Sniatynski walked, Nate DeYoung singled and Scott Booth walked to load the bases with no outs. Kris Franzen then doubled down the right field line scoring 2 runs. Following a Sussex pitching change, Bill Gorman hit a sac fly to left field to score Booth. After Dan Barwick was hit by a pitch, Jon Keane hit a single to center to score Franzen. The Bulldogs were back in the game with the score now tied. Sussex would respond with 4 more runs in the bottom of the 4th inning to make the score 8-4. But the Bulldogs had plenty of fight left in them and plated another 4 runs in the top of the 5th inning. Sniatynski led off the inning and was hit by a pitch. Nate DeYoung reached base on a fielder's choice and moved to 3rd base on a single by Booth. Franzen drove in DeYoung with a groundout while Booth advanced to 2nd base. Quinn Hyndiuk was then hit by a pitch. Bill Gorman stepped to the plate and delivered a 2-run double tying the game at 8-8. During the 4-run top of the 5th inning, something took place in the dugout that got the entire Bulldogs team fired up. Elijah Goodman, who had delivered a 117-pitch gem against the 7-Up just a few hours earlier, approached coach Jeff Mierow and said he wanted the ball and that he was going to finish the game for the Bulldogs. Coach Mierow trusted Big E and said okay, it's your game. Goodman shut the door on the Cardinals in the bottom half of the 5th inning and Brookfield would reward him by scoring another 4 runs in the 6th inning. Sniatynski led off the inning with a line drive to center and scored on a triple by DeYoung. Booth then hit a run-scoring double. With 2 outs, Gorman delivered a 2-run homer to left field that put the Bulldogs up 12-8. Sussex scored a run in the 6th inning but once again, Brookfield responded with a run in the 7th inning. With 2 outs, Sniatynski and DeYoung both singled leaving runners at 1st and 3rd. With DeYoung attempting to steal 2nd base on a 3-1 count to Booth, the pitch ball four. But the Sussex catcher threw to 2nd base and Sniatynski alertly stole home making the score 13-9. Goodman struck out 2 Sussex batters in the final half inning of the game to seal the win. It was an amazing day for Goodman, who got his 2nd win of the day to earn MVP of the Western Division Tournament. He pitched 3 innings against the Cardinals, giving up 1 run on 2 hits while striking out 6. On the day, Goodman threw 167 pitches and gave up just 1 run while striking out 14 batters in 9 innings of work. It was a great game at the plate for the Bulldogs. DeYoung was 4-for-5 with a triple, an RBI and 3 runs scored. Gorman was 2-for-3 with a homer, a double and 5 RBI. Booth was 2-for-3 with a double, 2 RBI and 3 runs scored. Sniatynski was 2-for-3 with a stolen base and 4 runs scored. Franzen had a double, 3 RBI and a run scored. Keane and Barwick each had a hit. This was the Bulldogs 2nd Championship in 4 years and their 4th in the last 10 years. A great accomplishment competing against highly talented teams in the Western Division.

What can you say about the West Bend 7-Up other than they have been the Bulldogs biggest archrival over the previous 5 years, ending Brookfield's season 4 times in championship games with the Bulldogs ending the 7-Up's season in 2017. So despite being the semifinal game, today's game felt more like a title bout. The Bulldogs sent their ace Elijah Goodman to the mound vs. West Bend's Matt Parrent. Goodman pitched an incredible game in the heat at Monches Field, throwing 6 scoreless innings and giving up 5 hits while striking out 8 and walking 3. Mike Mierow came in and slammed the door on the 7-Up, pitching a perfect 7th inning. Parrent took the loss, giving up 4 runs on 5 hits while striking out 2 and walking 3 in 6 innings of work. The game was scoreless heading into the bottom of the 6th inning when the Bulldogs erupted for 4 runs. Randy Sobczyk led off the inning and reached base on an error. That was followed by a 1-out walk to Nate DeYoung. With 2 outs, Quinn Hyndiuk stepped to the plate and drilled a 2 run double to deep left centerfield that would plate both pinch runner Sal Gambatese and DeYoung to make the score 2-0. Jon Keane followed with a double of his own to deep left centerfield that scored Hyndiuk. Dan Barwick then singled scoring Keane to make the score 4-0. The damage was done. Goodman took to the hill in the 7th inning to try and finish a complete game, but following singles by Billy Bynum and Parrent and a walk to pinch hitter Tyler Gross, Mierow would come on to close the game. Taylor Koth would hit a ground ball to 3rd baseman Nate DeYoung, who fired home to catcher Bill Gorman, who then threw to 1st baseman Scott Booth for the doubleplay. Nick Winter then flied out to leftfielder Dan Barwick to end the game. Keane led the Bulldogs at the plate, going 2-for-3 with an RBI and a run scored. Hyndiuk was 1-for-2 with a 2 RBI double and a run scored. Barwick was 1-for-2 with an RBI single and Sniatynski was 1-for-3 with a stolen base. The Bulldogs are now off to the Championship Game vs. the Sussex Cardinals.

The Bulldogs trailed early in their opening game of the Western Division Championship weekend at Nixon Park in Hartland as Pewaukee jumped out to a 2-0 lead in the 1st inning. But the Bulldogs battled back, immediately putting up 3 runs in the bottom half of the 1st inning. Following a walk to Randy Sobczyk and single to left by Parker Sniatynski, Nate DeYoung hit a moonshot to right centerfield for a 3-run homer. Brookfield added a run in the 2nd inning. Jon Keane reached base on an error and Kris Franzen hit a single. Sniatynski then came up with a run scoring single to make the score 4-2. The Bulldogs tacked on another run in both the 3rd and 4th inning. Scott Booth doubled off the right field fence and pinch runner Sal Gambatese scored on a Jon Keane single in the 3rd inning. Franzen led off the 4th inning with a line drive single. Following a fielder's choice and a stolen base by Sobczyk, DeYoung drilled a run-scoring double to make the score 6-2. Pewaukee's Tom Zimmerman made things interesting in the 5th inning with a 3-run homer to left centerfield to pull the Muskies within a run at 6-5. But in the bottom half of the 6th inning, Sniatynski would crush a homerun to right centerfield that made the score 7-5. Mike Mierow, who would pitch in all 3 games for the Bulldogs on the weekend, took to the mound to close the game and got the save. Jon Keane started and got the win, giving up 4 runs on 7 hits while striking out 10 and walking 2 in 6 innings. Sniatynski and DeYoung led the Bulldogs at the plate. Sniatynski was 3-for-4 with a homer, 2 RBI and 2 runs scored. DeYoung was 2-for-3 with a homer, 4 RBI and a run scored. Keane was 2-for-3 with an RBI and Franzen was 2-for-4. The Bulldogs advance to the Final Four to take on the West Bend 7-Up Sunday in Monches. 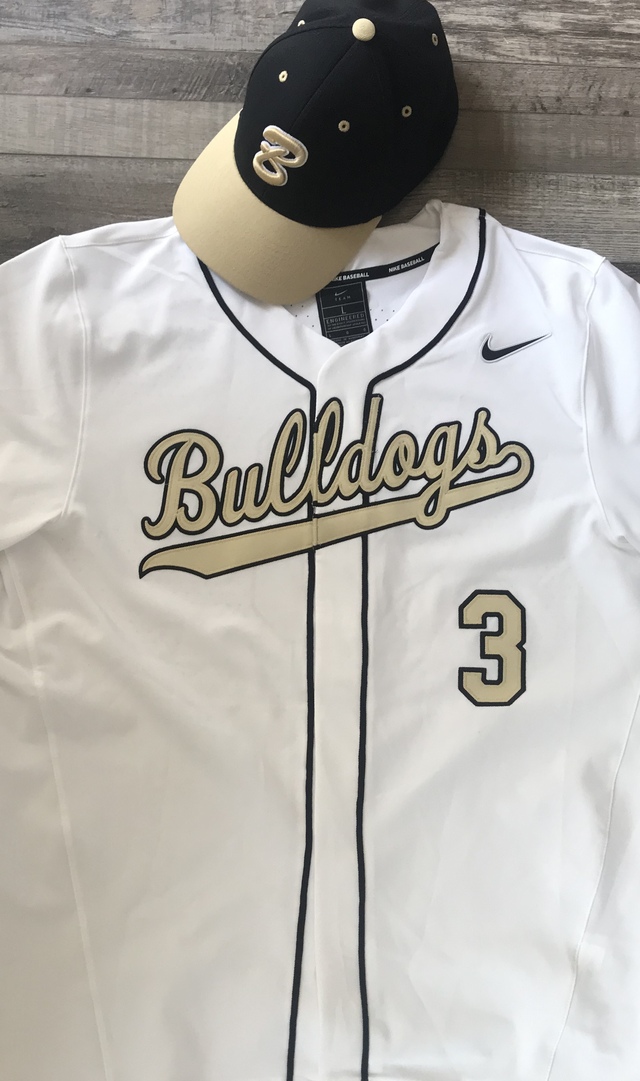 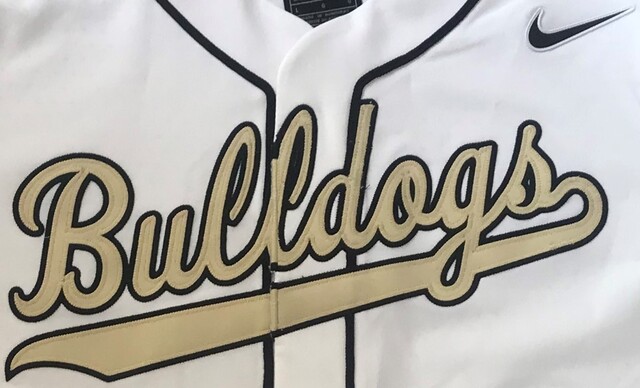